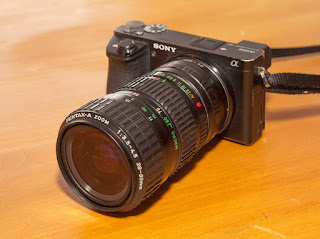 It's no lightweight being of mixed metal and plastic construction. With adapter it weighs 502 g, but this is appreciably lighter than the Tamron 28-80 that I have also tested.

How does it perform, I've not conducted any brick wall tripod tests as yet, but having taken a number of shots with it I am reasonably impressed.

Here's an example. It was a muggy, hazy day with poor visibility, but the image quality is OK 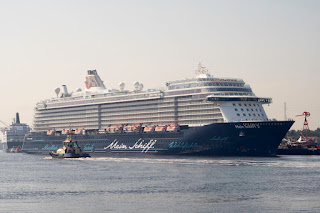 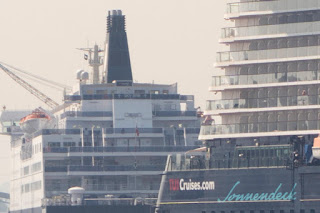 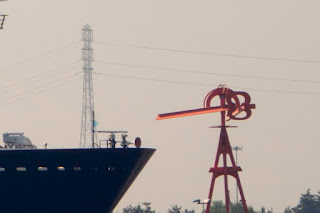 The edges are far better than either the modern Zeiss or Sony zoom achieved, but the overall image lacks a bit of contrast. I really do need to do some formal testing on a bright sunny day.

I need to compare this lens with the Tamron 28-80 that I have also tested, and with some of my old film camera primes.

Sadly, further shooting has revealed a fatal flaw with this lens, at closer distances and probably due to the ravages of age, it does not always achieve sharp focus in the centre of the field. Take a look at this image of some ironstone rocks and the actual pixel crops from centre, left and right. 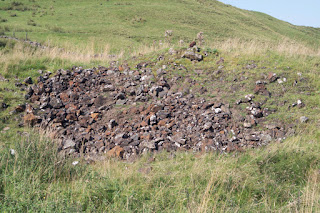 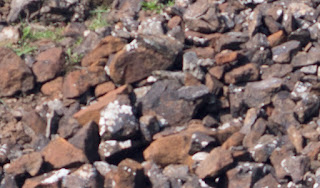 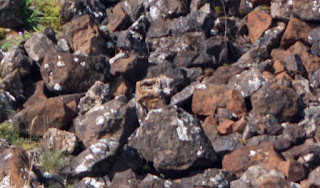 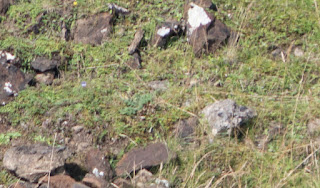 The camera was focused on the centre point, so this should not be a field curvature issue. Further I have more examples showing the same pattern. Maybe the wobbly focusing ring is the culprit? This particular copy of the lens is unusable, but I would like to get a hold of another example as, surely, this can't be a generic fault!

I've since carried out a tripod and wall test. Out of 15 images only one displays this fault, taken at 35mm and f8. Two other shots at that focal length and aperture do not.

March 10, 2019
I'm continuing to search for a suitable walk around zoom for use with the Sony a6500, having tried and rejected both the Zeiss 16-70 and the Sony 28-70.  It occurred to me that I had some old film era zooms lurking in the cupboard, and the most promising of the collection appeared to be the Tamron SP 28-80.

If you are not familiar with Tamron Adaptall lenses, they were supplied with a range of adapters to suit the most popular makes of film camera. I possess a small collection of the these removable mounts, including M42, Pentax K, Olympus and Canon FD.

The first mount I tried was the M42, it was nice and secure, but, in use, I quickly realised that I was unable to focus at a focal length of 28 mm - circa 30 mm and beyond were fine. Next came the Pentax, and that was better, but not perfect. Finally the Olympus, and that was much better, but the closest I can focus at 28 mm is about 1 m.

March 22, 2019
I've been experimenting with my old enlarger lenses as a means of scanning old negatives and slides, but, out of curiosity, decided to see if they could be used as prime lenses for distance work on the Sony a6500.

In order to do this you need to buy a focusing helicoid as enlarger lenses relied upon a bellows or helicoid within the enlarger to focus the negatives. You also need an M39 to M42 adapter as enlarger lenses came with the old Leica thread that is, nowadays, non standard. Finally an M42 to Sony E fit adapter completes the kit.

Enough of the cackle, how does it do? Very well actually, here's a view from the rear of our house and an actual pixels crop from the extreme left of the frame. Click for larger images.

The image is sharp to the edge of the frame with no sign of any CA - possibly helped by the fact that I have CA removal permanently engaged in Lightroom!
It's an unfair comparison I know, this inappropriate…
Post a comment
Read more